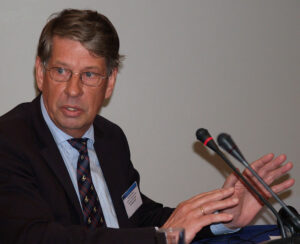 It is with great sadness that we learned that our founding director and chairman of the CESS board, Peter Volten, has passed away. He leaves behind his loving wife Karin, their children, and grandchildren.

After obtaining a PhD from the VU Amsterdam and a tenure as visiting scholar at Stanford University, Peter Volten worked at the Dutch Ministry of Defence from the mid-seventies until the end of the eighties. Just before the fall of the Berlin Wall in 1989, Peter moved to New York to become research director of the Institute for EastWest Studies. Here he conducted pioneering work and established contacts with academic, civil society, and policy communities in transitioning Central and Eastern European countries.

Peter was a staunch supporter of European unity and strong Transatlantic ties, contributing to peace and security in Europe by reaching out to people that had suffered authoritarian rule. A mission that remains more urgent than ever today.

After his return to the Netherlands in 1993, Peter founded the Dutch branch of the Institute for EastWest Studies. He took initiative by engaging actively with young democracies in Central and Eastern Europe. After being appointed professor of International Relations at the University of Groningen in 1994, he showed vision by establishing the Centre for European Security Studies (CESS).

From its foundation until 2005 Peter was the director of CESS, after which he took a step back and became chair of the board. Thanks to his boundless energy and wide international network, CESS was able to set up training and research programmes from the Balkans to Turkey and from Central Europe to Central Asia. The democratic development of Romania – where he received the title of Commander – and Ukraine that he both visited many times for teaching, have been especially dear to Peter.

Debating European security and promoting democracy in governing security stood central in Peter Volten’s efforts. His initiative and vision are the foundation of CESS and inspire us to continue the work he has laid out for us. CESS staff and board members will greatly miss Peter.