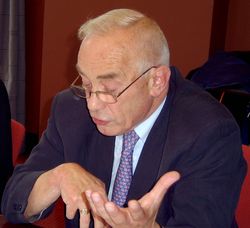 Resting his fists on the lectern, David Greenwood would fix his audience with a glare and pronounce: ‘REVEAL, EXPLAIN AND JUSTIFY.’ It was his golden rule of democratic governance.

David Greenwood was born in England in 1937 and died in 2009 in Scotland. He joined CESS in 1997 as its Research Director. For 10 years, he was the principal researcher and teacher at CESS, and a friend and mentor to his colleagues. To borrow a phrase of his own, David Greenwood was a construction worker on the building site of democracy. This series of research papers is dedicated to him.

24 SSR in the Republic of Moldova: Strengthening Oversight of the Security Sector (Editors: Erik Sportel and Sami Faltas)

23 Perceptions and misperceptions in the EU and Turkey: Stumbling blocks on the road to accession (Peter M.E. Volten, editor)

22 Peace support operations: The past and the future. Papers of the Ankara Seminar (Editors: Ritske Bloemendaal and Kars de Bruijne)

20 UKRAINE AND NATO: The Policy and Practice of Co-operating with the Euro-Atlantic Security Community(Nienke de Deugd)